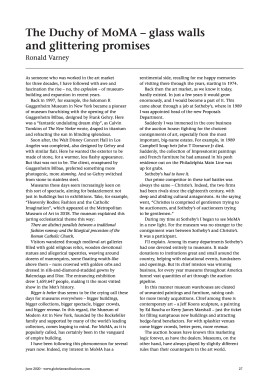 The Duchy of MoMA - glass walls and glittering promises

Turning to the art world, Ronald Varney (New York) shares his delightfully written intrigue about the history of the Museum of Modern Art (MoMA) in New York. Ron traces the history of MoMA and along the way recounts numerous stories of how diligent the leading museums have been to secure ?promised gift' paintings. He lists a number of ?zippy' books on the subject. Among these are Making the Mummies Dance by Thomas Hoving of the Met; The Boston Raphael by Belinda Rathbone (concerning the ill-starred reign of her father, Perry Rathbone, as director); and Self- Portrait with Donors by John Walker III, longtime head of the National Gallery. Each of these books is peppered with tales of chasing gifts from wealthy collectors who often prove elusive, dishonest, manipulative, parsimonious and ruthless. Sometimes they even want immortality as part of a deal. Even the Tate in London is included: ??Ambivalent' would be a good word to describe the Tate in London in the 1950s as it languidly built up its holdings of modern art, director Sir John Rothenstein disparaging Cubism as little more than ?Bijou follies'. Donors to the museum during this time were thus occasionally dismissed, along with their proposed gifts, if the art seemed too new, too daring.? Private collectors and donors will all enjoy his witty article.
Add to favourites Request a trial
We use cookies to ensure that you get the best experience on our website. Learn more about how we use cookies.