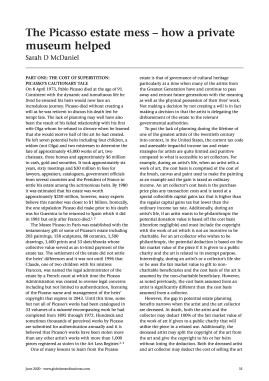 The Picasso estate mess - how a private museum helped

Staying with the art subject we have a two-part article prompted by the incredible mess of the estate left by Pablo Picasso. Sarah D McDaniel (New York) begins with the facts: Picasso left seven potential heirs including four children, a widow and two mistresses to determine the fate of approximately 45,000 works of art, two chateaux, three homes and approximately $6 million in cash, gold and securities. It took approximately six years, 60 meetings and $30 million in fees for lawyers, appraisers, cataloguers, government officials from several countries and the President of France to settle his estate among the acrimonious heirs. Could this have been planned better? In the second part Sarah covers the who, what, why and how of creating a private art museum. The role of private collectors is substantial. A study in 2016 identified 317 private contemporary art museums globally in 45 countries of which over 70% were founded since 2000 and 20% were opened in the past five years. Globally, the United States ranked second in number of private contemporary art museums with 43 - behind South Korea and followed by Germany, China and Italy. She explains the benefits and challenges of creating a private art museum. She closes with the fact that on a global basis it is estimated that approximately $3 trillion of art is currently held in private collections and represents almost 10% of UHNW individuals' balance sheets. Clearly, there are many opportunities to do better planning than Picasso.
Add to favourites Request a trial
We use cookies to ensure that you get the best experience on our website. Learn more about how we use cookies.