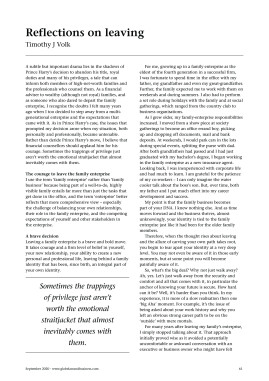 A subtle but important drama lies in the shadows of Prince Harry's decision to abandon his title, royal duties and many of his privileges, a tale that can inform both members of high-net-worth families and the professionals who counsel them. As a financial adviser to wealthy (although not royal) families, and as someone who also dared to depart the family enterprise, I recognise the doubts I felt many years ago when I too decided to step away from a multigenerational enterprise and the expectations that came with it. As in Prince Harry's case, the issues that prompted my decision arose when my situation, both personally and professionally, became untenable. Rather than deride Prince Harry's move, I believe that financial counsellors should applaud him for his courage. Sometimes the trappings of privilege just aren't worth the emotional straitjacket that almost inevitably comes with them.
Add to favourites Request a trial
We use cookies to ensure that you get the best experience on our website. Learn more about how we use cookies.