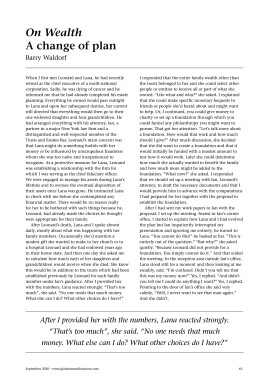 On Wealth - A change of plan

When I first met Leonard and Lana, he had recently retired as the chief executive of a multi-national corporation. Sadly, he was dying of cancer and he informed me that he had already completed his estate planning. Everything he owned would pass outright to Lana and upon her subsequent demise, her current will directed that everything would then go to their one widowed daughter and four grandchildren. He had arranged everything with his attorney, Ian, a partner in a major New York law firm and a distinguished and well-respected member of the Trusts and Estates Bar. Leonard's main concern was that Lana might do something foolish with her money or be influenced by unscrupulous fraudsters whom she was too naive and inexperienced to recognise. As a protective measure for Lana, Leonard was establishing a relationship with the firm for which I was serving as the chief fiduciary officer. We were engaged to manage his assets during Lana's lifetime and to oversee the eventual disposition of their assets once Lana was gone. He instructed Lana to check with me before she contemplated any financial matter. There would be no reason really for her to be bothered with such things because he, Leonard, had already made the choices he thought were appropriate for their family.
Add to favourites Request a trial
We use cookies to ensure that you get the best experience on our website. Learn more about how we use cookies.