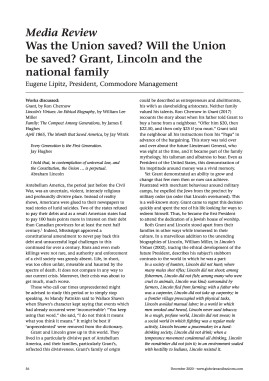 Media Review - Was the Union saved? Will the Union be saved? Grant, Lincoln and the national family

Our Media Review comes from Eugene Lipitz (United States), a member of our editorial board. Eugene discusses works on the pre-civil war United States, comparing that era to now and to a large family system, with this concluding sobering thought: Will we face it as the best of that former generation would have had us do it: with malice toward none and in the spirit of family seeking renewal? Will we do any better than they did in following this advice? Signs are not good in the United States, as old hatreds are inflamed on left and right and the nation's wounds, notwithstanding the toll paid in blood, still refuse to heal. The Antebellum United States sacrificed an entire generation of young people who were not there to remake their country. We have no such deficit today. Will our young people be a brave first generation, or, thinking themselves rebels, make no genuine break with the past and sink into the unforgiving spirit of their forbearers?
Add to favourites Request a trial
We use cookies to ensure that you get the best experience on our website. Learn more about how we use cookies.