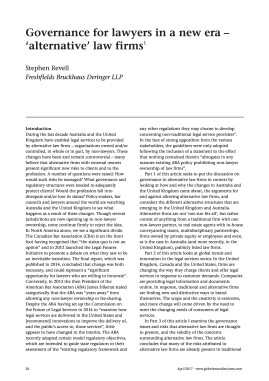 Governance for lawyers in a new era - 'alternative' law firms

During the last decade Australia and the United Kingdom have enabled legal services to be provided by alternative law firms - organisations owned and/or controlled, in whole or in part, by non-lawyers. These changes have been and remain controversial - many believe that alternative firms with external owners present significant new risks to clients and to the profession. A number of questions were raised: How would such risks be managed? What governance and regulatory structures were needed to adequately protect clients? Would the profession fall into disrepute and/or lose its status? Policy-makers, bar councils and lawyers around the world are watching Australia and the United Kingdom to see what happens as a result of these changes. Though several jurisdictions are now opening up to non-lawyer ownership, some continue firmly to reject the idea. In North America alone, we see a significant divide. The Canadian Bar Association (CBA) is on the front foot having recognised that ?the status quo is not an option? and in 2012 launched the Legal Futures Initiative to promote a debate on what they saw to be an inevitable transition. The final report, which was published in 2014, concluded that change was both necessary, and could represent a ?significant opportunity for lawyers who are willing to innovate?. Conversely, in 2013 the then President of the American Bar Association (ABA) James Silkenat stated categorically that the ABA was ?years away? from allowing any non-lawyer ownership or fee-sharing. Despite the ABA having set up the Commission on the Future of Legal Services in 2014 to ?examine how legal services are delivered in the United States and [recommend] innovations to improve the delivery of, and the public's access to, those services?, little appears to have changed in the interim. The ABA recently adopted certain model regulatory objectives, which are intended to guide state regulators in their assessment of the ?existing regulatory framework and any other regulations they may choose to develop concerning non-traditional legal service providers?. In the face of strong opposition from the various stakeholders, the guidelines were only adopted following the inclusion of a statement to the effect that nothing contained therein ?abrogates in any manner existing ABA policy prohibiting non-lawyer ownership of law firms?.
Add to favourites Request a trial
We use cookies to ensure that you get the best experience on our website. Learn more about how we use cookies.