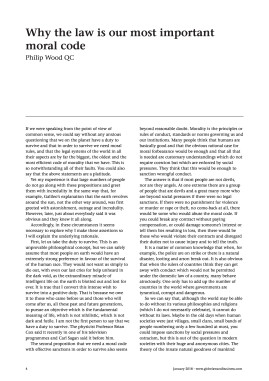 Why the law is our most important moral code

If we were speaking from the point of view of common sense, we could say without any anxious questioning that we on the planet have a duty to survive and that in order to survive we need moral rules, and that the legal systems of the world in all their aspects are by far the biggest, the oldest and the most efficient code of morality that we have. This is so notwithstanding all of their faults. You could also say that the above statements are a platitude. Yet my experience is that large numbers of people do not go along with these propositions and greet them with incredulity in the same way that, for example, Galileo's explanation that the earth revolves around the sun, not the other way around, was first greeted with astonishment, outrage and incredulity. However, later, just about everybody said it was obvious and they knew it all along.
Add to favourites Request a trial
We use cookies to ensure that you get the best experience on our website. Learn more about how we use cookies.