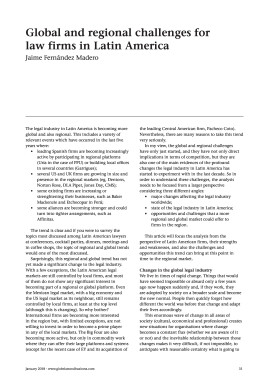 Global and regional challenges for law firms in Latin America

The legal industry in Latin America is becoming more global and also regional. This includes a variety of relevant events which have occurred in the last five years where: leading Spanish firms are becoming increasingly active by participating in regional platforms (Uría in the case of PPU) or building local offices in several countries (Garrigues); several US and UK firms are growing in size and presence in the regional markets (eg, Dentons, Norton Rose, DLA Piper, Jones Day, CMS); some existing firms are increasing or strenghtening their businesses, such as Baker Mackenzie and Etchecopar in Per?; some aliances are becoming stronger and could turn into tighter arrangements, such as Affinitas. The trend is clear and if you were to survey the topics most discussed among Latin American lawyers at conferences, cocktail parties, dinners, meetings and in coffee shops, the topic of regional and global trends would one of the most discussed.
Add to favourites Request a trial
We use cookies to ensure that you get the best experience on our website. Learn more about how we use cookies.