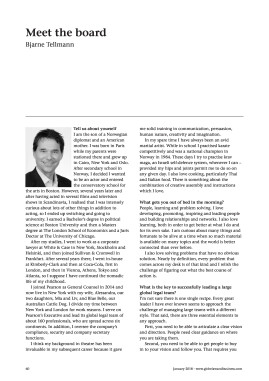 Meet the board - Bjarne Tellmann

I am the son of a Norwegian diplomat and an American mother. I was born in Paris while my parents were stationed there and grew up in Cairo, New York and Oslo. After secondary school in Norway, I decided I wanted to be an actor and entered the conservatory school for the arts in Boston. However, several years later and after having acted in several films and television shows in Scandinavia, I realised that I was intensely curious about lots of other things in addition to acting, so I ended up switching and going to university. I earned a Bachelor's degree in political science at Boston University and then a Masters degree at The London School of Economics and a Juris Doctor at The University of Chicago. After my studies, I went to work as a corporate lawyer at White & Case in New York, Stockholm and Helsinki, and then joined Sullivan & Cromwell in Frankfurt. After several years there, I went in-house at Kimberly-Clark and then at Coca-Cola, first in London, and then in Vienna, Athens, Tokyo and Atlanta, so I suppose I have continued the nomadic life of my childhood. I joined Pearson as General Counsel in 2014 and now live in New York with my wife, Alessandra, our two daughters, Mia and Liv, and Blue Belle, our Australian Cattle Dog. I divide my time between New York and London for work reasons. I serve on Pearson's Executive and lead its global legal team of about 160 professionals, who are spread across six continents. In addition, I oversee the company's compliance, security and company secretary functions.
Add to favourites Request a trial
We use cookies to ensure that you get the best experience on our website. Learn more about how we use cookies.