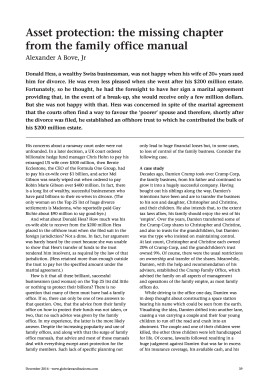 Asset protection: the missing chapter from the family office manual

Donald Hess, a wealthy Swiss businessman, was not happy when his wife of 20+ years sued him for divorce. He was even less pleased when she went after his $200 million estate. Fortunately, so he thought, he had the foresight to have her sign a marital agreement providing that, in the event of a break-up, she would receive only a few million dollars. But she was not happy with that. Hess was concerned in spite of the marital agreement that the courts often find a way to favour the ?poorer' spouse and therefore, shortly after the divorce was filed, he established an offshore trust to which he contributed the bulk of his $200 million estate.
Add to favourites Request a trial
We use cookies to ensure that you get the best experience on our website. Learn more about how we use cookies.