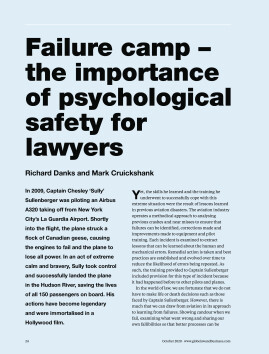 Failure camp - the importance of psychological safety for lawyers

In 2009, Captain Chesley ?Sully' Sullenberger was piloting an Airbus A320 taking off from New York City's La Guardia Airport. Shortly into the flight, the plane struck a flock of Canadian geese, causing the engines to fail and the plane to lose all power. In an act of extreme calm and bravery, Sully took control and successfully landed the plane in the Hudson River, saving the lives of all 150 passengers on board. His actions have become legendary and were immortalised in a Hollywood film.
Add to favourites Request a trial
We use cookies to ensure that you get the best experience on our website. Learn more about how we use cookies.