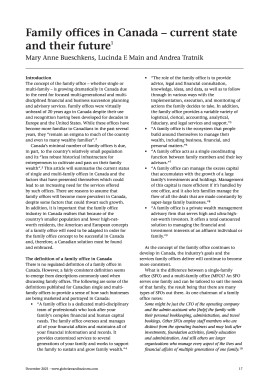 Family offices in Canada - current state and their future

The concept of the family office - whether single or multi-family - is growing dramatically in Canada due to the need for focused multi-generational and multidisciplined financial and business succession planning and advisory services. Family offices were virtually unheard of 20 years ago in Canada despite their use and recognition having been developed for decades in Europe and the United States. While these offices have become more familiar to Canadians in the past several years, they ?remain an enigma to much of the country and even to many wealthy families?. Canada's minimal number of family offices is due, in part, to the country's relatively small population and its ?less robust historical infrastructure for entrepreneurs to cultivate and pass on their family wealth?. This article will summarise the current status of single and multi-family offices in Canada and the factors that have presented themselves which could lead to an increasing need for the services offered by such offices. There are reasons to assume that family offices will become more prevalent in Canada, despite some factors that could thwart such growth. In addition, it is important that the family office industry in Canada realises that because of the country's smaller population and fewer high-networth residents, the American and European concepts of a family office will need to be adapted in order for the family office concept to be successful in Canada and, therefore, a Canadian solution must be found and embraced.
Add to favourites Request a trial
We use cookies to ensure that you get the best experience on our website. Learn more about how we use cookies.