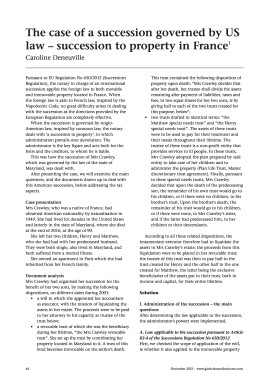 An intriguing property case carefully analysed by Caroline Deneuville which will be of interest to all Americans (and others) who buy property in France - what law will apply for inheritance upon the death of the owner? The deceased woman was French but had acquired US citizenship and lived in the United States, the state of Maryland, for many years. She had two adult children, who also lived in Maryland. She had a Paris apartment that she had inherited. Would the law of Maryland or the law of France determine who would inherit, and who would administer the succession? No spoilers - it's a great read.
Add to favourites Request a trial
We use cookies to ensure that you get the best experience on our website. Learn more about how we use cookies.