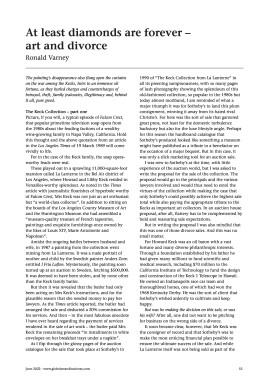 At least diamonds are forever - art and divorce

"At least diamonds are forever - art and divorce", another charming set of stories from our special contributor Ron Varney, an art consultant based in New York. Ron notes that the grand auction houses depend on a natural trio for their consignments: death, debt and divorce. He includes some great stories, as usual, including a butler carrying out a theft of a painting at the divorcing wife's behest and placing her proceeds in envelopes on her breakfast tray. Then there's the vengeful recent divorce - including a court-ordered auction of the art collected over some 56 years of marriage by New York real estate mogul Harry Macklowe and his wife Linda, who was the true collector. But as her marriage to Mr Macklowe fell apart, with no amicable resolution possible, it was left to a judge to order the entire collection valued and sold at auction. Ron adds a gloss: "while Mrs Macklowe seems to have comported herself with dignity throughout this cruel ordeal, her husband took a more gloating, cringeworthy approach. On the sides of a new apartment tower that he had developed on the corner of Park Avenue and 55th Street, he displayed, billboard-style, two large colour photographs of himself and his new wife."
Add to favourites Request a trial
We use cookies to ensure that you get the best experience on our website. Learn more about how we use cookies.