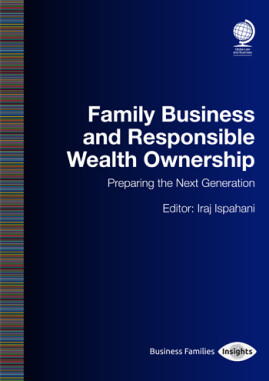 Preparing the Next Generation

This Special Report aims to develop a shared mindset and better understanding across and between the generations, focusing in particular on matters from the perspective of the next generation.

Family businesses and wealth owners today face a wide range of challenges, including increasing government interventionism, business disruption, technology-driven change, international conflicts and the climate crisis. Added to this is the move to greater transparency of the midshore and onshore world and the implementation of the Common Reporting Standard, the increased scrutiny of wealth owners by governments and the media, and the pandemic underscoring the need to apply more sustainable business practices, all of which complicates the processes of creating, retaining and transitioning wealth.

How can the rising next generation make sense of and adapt to this complex world? Family Business and Responsible Wealth Ownership: Preparing the Next Generation aims to develop a shared mindset and better understanding across and between the generations, focusing in particular on matters from the perspective of the next generation. It covers key issues pertaining to the important and often complex transitions that all families face, as well as themes which are highly relevant for wealth and business owning families at a time where there is an increasing focus on responsible capitalism.

In this report, an international group of experts with decades of practical experience working with wealth-owning families around the world bring together the perspectives of the lived experience of business owning families and the advisory world to examine, among other key topics:
•Finding and deploying your purpose;
•Effective mentorship for the next generation;
•Resolving intergenerational conflicts;
•Navigating social media; and
•Creating the next generation of entrepreneurs.

This title is essential reading for all generations involved in family businesses and wealth ownership. The rising next generations are the future of these families and should be better understood and supported so that family human capital is not wasted or overlooked. It is also an invaluable guide for those who advise families from a professional services or wealth management perspective.

Charlie Bain is managing partner at Digitalis, an advisory company that specialises in online reputation management, crisis communications, digital privacy and risk. He is widely recognised as a leading expert in advising clients on their digital footprint and the effect this has on their reputation. During his career, he has helped a number of leading families, global corporates and prominent individuals to understand the nascent field of internet risk and digital crisis communications. Charlie is on the advisory board of VALUEworks, a multi-family office based in Zurich; and a senior adviser to Dallington Associates, a company that offers specialist mentorship for the rising generation. In addition, Charlie has written for The International Family Offices Journal and was a contributor to the book Advising the Wealthy Client (Globe Law and Business, 2020), giving an insight into his experience advising family offices.
In 2021, Charlie was recognised as a top recommended specialist in reputation management by Spear’s Magazine.

Jed Emerson is a strategic adviser to families and investment firms working to weave impact and purpose into their capital management and deployment strategies. Internationally recognised as a unique thought leader and innovator, he has been referred to as both the ‘Godfather’ and the ‘conscience’ of impact investing. Emerson co-authored the first book on impact investing and wrote many of the early framing papers on the field. He introduced such concepts as social return on investment, total portfolio management (in which investors consider how best to optimise value from philanthropic, near-market and market-rate investing) and blended value. His eighth book, The Purpose of Capital: Elements of Impact, Financial Flows and Natural Being, is available in free digital format and has been translated into both Chinese and Spanish. He has held academic appointments at Harvard, Stanford and Oxford business schools and is currently a senior research fellow at the University of Heidelberg.

Paul L Hokemeyer (PhD, JD) is a licensed marriage and family therapist, consultant and author of the ground-breaking book Fragile Power (Hazelden, 2019). A founding principal of the London-based Drayson Mews International, he is one of the world’s foremost experts on resolving the complex, sensitive and highly nuanced mental health and relationship issues that arise among the world’s most prominent families. He is listed as one of the world’s top problem solvers in Tatler’s High Net Worth Address Book and was chosen by Harvard Medical School to represent the field of behavioural health in the first cohort of its Global Leaders in Health Care programme. Dr Hokemeyer’s work has been utilised by the World Economic Forum and featured in a wide range of academic and popular publications, including The New York Times, The Wall Street Journal, Harvard Business Review Arabia, The Johns Hopkins Newsletter, WebMD and The Journal of Wealth Management.

Iraj Ispahani is the CEO of Ispahani Advisory, which advises family businesses on business strategy, governance, people and education. The firm operates internationally and specialises in working with family and private businesses, private foundations and wealth owners. Iraj also serves as a group director and board member of the Ispahani Group, a family business headquartered in Bangladesh which marked 200 years in 2020.
Prior to joining the family business, Iraj held global and regional leadership roles in banking at JP Morgan and organisational development at Korn/Ferry. He also co-founded Cantos, an online corporate communications business, in 2001.
Iraj is chair of the Shakespeare’s Globe Council; an independent trustee of the Standard Chartered Foundation; an adviser to UNICEF in the United Kingdom and Bangladesh; and a member of the UK Development Board of the ICRC. He was a founding adviser of the Responsible Family Business and Wealth Ownership programme created by Cambridge Judge Business School.
He is now a member of the advisory board, lecturer and facilitator of a new programme led by the Institute for Sustainability Leadership at Cambridge on Multi-Generational Leadership, equipping the world’s most influential families to shape the 21st century. Iraj was educated at Winchester College and holds a master’s degree in international relations from Cambridge University and a bachelor’s degree (with honours) from London University in politics and history.

Ed Lee is a director of Bowbridge, a consultancy firm which helps families and entrepreneurs to enhance and protect shareholder value throughout the business cycle. With extensive financial, operational and transaction experience, he focuses on the development and delivery of strategic initiatives and transitions such as succession and exit. Ed helps business owners to evolve strategy, enhance business operations, improve profitability and navigate risks. Ed was previously a director in KPMG’s market-leading private equity team, advising some of the highest-profile global funds on their M&A activities. He left KPMG in 2017 to join Bonhams as special adviser, navigating the business through operational improvement, succession to non-family management and sale to new shareholders in 2018. Alongside involvement in Bowbridge and his own family operations, Ed is a business strategy expert at Ispahani Advisory and has a portfolio of non-executive roles. Ed is a fellow of the Institute of Chartered Accountants in England and Wales.

Stefan Liniger is the chief executive of Kaiser Partner Wealth Advisors and a senior adviser at Ispahani Advisory. He obtained his doctor iuris at the University of Zurich and his LLM at Cornell Law School. He is a non-practising member of the Swiss Bar and holds a postgraduate diploma in psychosynthesis counselling awarded by the University of Middlesex.
As a long-term sparring partner, Stefan helps families and entrepreneurs to solve their strategic wealth challenges – including family, business and investment governance. He also serves as a board member of family businesses and acts as trustee, protector, executor and mediator. Prior to joining Kaiser Partner Wealth Advisors, Stefan was chief executive of Rothschild & Co’s global wealth planning and trust business, after having created and led the wealth planning function at Goldman Sachs. Before that, he was a partner with the law firm Bär & Karrer in Zurich.

Philip Marcovici is retired from the practice of law and consults with governments, financial institutions and global families. He was a partner of Baker McKenzie, which he joined in 1982, and practised in the area of international taxation in Hong Kong and Zurich while with the firm. Philip has also practised law in New York and Vancouver, British Columbia. He retired from Baker McKenzie at the end of 2009. The author of numerous publications, Philip is also the author of The Destructive Power of Family Wealth (John Wiley & Sons). Among others, Philip is a member of the Public Policy Committee of STEP and chairs its Responsible Stewardship of Wealth thought leadership group. He holds law degrees from Harvard Law School and the University of Ottawa (magna cum laude), and is admitted to practise in Hong Kong, the State of New York, the Province of British Columbia (retired), Canada, England and Wales.

Jessica McGawley is a consulting psychologist, family mediator and the CEO and founder of Dallington Associates, a specialist mentorship practice for the rising next generation. She holds an undergraduate degree in ethnomusicology and African culture; a postgraduate diploma in counselling and psychotherapy; and a master’s in consulting psychology – psychodynamic and systemic approaches. Prior to founding Dallington in 2015, Jessica spent seven years as head of operations for London-based consulting firm Oxford Place, where she focused on wealth transition to the next generation.
The youngest-ever board member of United Nations Women London in 2012, Jessica proudly set up its first mentoring scheme. She is a trustee of the Cassandra Learning Centre, a charity that focuses on supporting victims of domestic abuse; and a governor of the Mossbourne Victoria Park Academy in Hackney, London. Jessica is listed as one of the world’s top problem solvers in Tatler’s High Net Worth Address Book.

Over nearly three decades, Caroline Underwood OBE has worked with philanthropic individuals and families to achieve positive change, as well as with a wide range of charities and cultural bodies in the UK and worldwide.
Caroline was awarded an OBE for charitable services in the 2017 Queen’s Birthday Honours. She is a fellow of the Royal Society of Arts; a trustee of donor-advised fund Our Common Good; a governor of Britain’s leading preparatory school, the Dragon School, Oxford; and former vice chair of UNICEF UK.