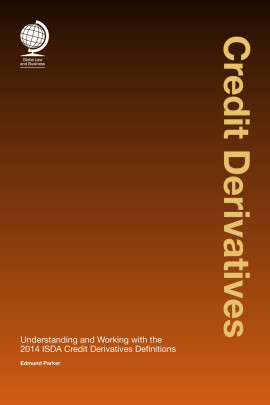 With the launch of the 2014 ISDA Credit Derivatives Definitions, this title will provide a detailed and comprehensive analysis of the new 2014 Definitions. The book provides practical reading for all credit derivatives market participants looking to gain a solid understanding of the definitions.

This book covers the 2014 Definitions in detail, while also discussing the differences with the predecessor definitions. This practitioner-oriented title also covers auction settlement, the DC Rules, POB Rules, SRO Rules and the Determinations Committees, as well as looking in detail at the products that the 2014 Definitions are used with, such as single name and index credit default swaps, and structured products.

The new edition provides practical reading for lawyers, whether in private practice or in-house, and all credit derivatives market participants looking to gain a solid understanding of the new definitions.

Author Edmund Parker is the global head of Mayer Brown’s Derivatives & Structured Products practice and an internationally recognised leading expert in the field.

It takes courage and much energy for a practicing corporate lawyer to write a legal treatise. The decision to take time away from a thriving law practice, or to spend precious leisure time, to develop a law book is a difficult one. Never taken lightly, and perhaps often regretted before the work is done, or so I imagine. Query, then: How best to describe the author of a second edition of a legal monograph? Is that lawyer: (A) a glutton for punishment, (B) a fool in search of the Holy Grail of greater writer's royalties, (C) a lawyer with too much idle time (or too many under-utilized supporting colleagues), or (D) all of the above? In the case of Edmund Parker, a partner in and the global head of the Derivatives and Structured Products practice of the law firm Mayer Brown LLP, the answer to the question is a resounding "None of the above!"

Ed's new book, 'Credit Derivatives: Understanding and Working with the 2014 JSDA Credit Derivatives Definitions', makes a great contribution to the literature of financial law and deserves a place on the bookshelf of any lawyer working in the domain of credit derivatives. As Ed points out in his Foreword, the global financial crisis of 2007-08 followed hard on the heels of the publication of his first book on this topic 1. and profoundly altered the landscape of the over-the-counter credit derivatives markets. The ensuing period of marketplace reaction 2. and regulatory intervention brought a shift to the patterns of contract documentation and the processes of working with the documents after trades had been struck that was nothing short of seismic. Ed's new book brightly illuminates the shift and provides helpful narrative guidance to lawyers seeking a firmer grasp of this important field of financial law. As was its predecessor, the book is divided into four parts. Part I, like its older sibling, describes the commercial context in which the ISDA definitions are employed. Part I provides many detailed examples of complex structured credit products and is useful in getting behind the buzzwords and acronyms with which this part of finance is particularly rife. Part II, similarly, introduces the important (and significantly changed) features of the definitions. However, Part II helpfully stops to pause after describing the key changes made by the 2014 ISDA Credit Derivatives Definitions to their 2003 forerunner and providing a high-level (but still 70-plus-page) overview of the definitions 3. Part III of the new book continues down this path, with a section-by-section review of the pro-visions of the new ISDA definitions, completing in this respect the task of Part II of its predecessor. Part IV ("Ancillary Topics") departs from the tracks laid down in the first edition, instead summarizing the most important provisions of certain texts which, while outside the 2014 ISDA Credit Derivatives Definitions themselves, are nonetheless fundamental to understanding and using the definitions in live credit derivative products. These are the rules governing the all-important ISDA Credit Derivatives Determinations Committees ("DCs") and the determination of Standard Reference Obligations ("SROs") and Package Observable Bonds ("POBs"). What did I just say about acronyms?
At just over 550 pages, this is not a short book 4. It treats in considerable detail, with both historical and hypothetical examples, a subject that is at times counterintuitive and perplexing-and one that has changed dramatically in a very short period. I was impressed not only with the large scale of this work but with its command over the subtle nuances of the texts it purports to explain. I fully expect and intend to use this book in my own practice. The book would benefit greatly from the addition of a topical index. Future editions of the book would also benefit from summaries of the growing body of Jaw arising out of litigation of credit derivatives disputes in the U.S. state 5. and federal 6. courts. But these complaints are not about fatal flaws. I heartily endorse this important treatise and look forward eagerly to reading future editions of it.

2. This began with private sector efforts to bring order to a product line that had clearly outgrown the two-party contract model in which it had its origins. 3. In the author's Foreword, Ed writes that the overview "is designed to be read through in a single go." I tried this and I agree that it's a good way to approach this material. 4. This is not intended as criticism of the editing process or of the author's capacity for word economy. Its forebear was seven pages longer and had less subject matter to cover. 5. See, e.g., Good Hill Master Fund L.P. v. Deutsche Bank AG, 2017 Slip Op. 00428 (decided January 24, 2017, Appellate Division, First Dept.). 6. See, e.g., Merrill Lynch International v. XL Capital Assurance Inc., 564 F.Supp.2d 298 (SDNY 2008).

Yet for the practitioner, or, indeed, the legal researcher, there are precious few books that explain the legal design and documentation of credit derivatives. One such rare example is Edmund Parker’s Credit Derivatives: Understanding and Working with the 2014 ISDA Credit Derivatives Definitions.1 As readers of this journal will be aware, all credit derivatives, including those linked to staged credit events, are constructed using industry standard form contracts, and that book is an invaluable guide to the negotiation and drafting of those contracts.
Dr Paul Ali
Company and Securities Law Journal

Edmund (“Ed”) Parker is global head of Mayer Brown’s Derivatives and Structured Products practice, head of the firm’s Banking and Finance practice in London, and serves on Mayer Brown’s Partnership Board. Consistently ranked as a key individual and receiving strong market praise from the legal directories, the most recent sources say that Ed “enjoys a reputation as one of the City’s leading lawyers”. Clients appreciate his “unrivalled breadth and depth of knowledge across all asset classes” and regard him as “one of the lawyers who knows the most about derivatives – he wrote the book on them” (Chambers UK 2015). Ed is also described as “very user-friendly and very easy to deal with”, with the same source adding that “he really knows his stuff” and is “a leader in his field”. Ed was nominated for Derivatives Lawyer of the Year at the 2014 Global Capital Derivatives Awards.
Ed is the industry’s most widely published lawyer on derivatives matters, with his views regularly sought by the press and on television. In addition to this book, his written works include an acclaimed trilogy of derivatives books, consisting of: as sole author, Credit Derivatives: Documenting and Understanding Credit Derivative Products; as sole editor, Equity Derivatives: Documenting and Understanding Equity Derivative Products; and as co-editor, Commodity Derivatives: Documenting and Understanding Commodity Derivative Products. He is currently co-editing the third edition of Practical Derivatives, which will be
released in early 2017.