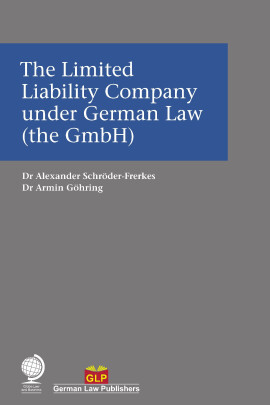 The Limited Liability Company under German Law (the GmbH)

The Limited Liability Company under German Law, published in association with German Law Publishers, explores the most relevant legal issues and topics for investors seeking to establish or acquire a GmbH in Germany and is aimed at investors with a legal background as well as those without.

With over one million entities, by far the most common and, thus, the most important legal company form used in Germany is the limited liability company (the GmbH). The GmbH has a number of advantages: it limits shareholder liability; it can be adapted to the specific needs of shareholders and their business model; and it provides a platform for small businesses as well as for holding companies for international groups and not-for-profit organisations. Given its ample scope, and the fact that it can be very easily established and requires minimal administrative effort, the GmbH is also the most frequent legal form used by foreign investors in Germany.

Against this backdrop, The Limited Liability Company under German Law, published in association with German Law Publishers, explores the most relevant legal issues and topics for investors seeking to establish or acquire a GmbH in Germany and is aimed at investors with a legal background as well as those without. In addition to providing an overview of the requirements of the formation process, this comprehensive edition demonstrates the GmbH’s inherent flexibility as well as helping legal practitioners (based in Germany and elsewhere) decide on whether a GmbH is most suitable for their needs.

Until 2014, Alexander Schröder-Frerkes served as managing partner for Germany, head of the Global Corporate/ M&A Group and member of the Global Management Board of the firm. Prior to joining Bird & Bird, he was a member of the managing board of a wellknown major German law firm. From 1993 to 1994 he worked as a foreign associate in the Chicago office of a highly regarded global US- based law firm. Dr Schröder-Frerkes advises international and domestic clients on M&A, private equity and venture capital transactions, MBOs, group valuations, restructuring and reorganisations, as well as joint ventures. He has considerable experience in corporate/ M&A transactions, having advised on various major transactions and is highly regarded for his work in this area. The JUVE Handbook German Commercial Law Firms 2010– 2019 acknowledges him as “one of the most recommended lawyers” and The European Legal 500 Directory describes him as “impressive” and of “M&A calibre”. In addition, Dr Schröder- Frerkes is Chairman of the American Chamber of Commerce (AmCham) for the chapter of North Rhine- Westphalia and member of the board of the Deutsches Rotes Kreuz Niederrhein (Red Cross). Furthermore, he is a member of a number of Advisory Boards of German companies, including Düsseldorf Airport. In 2010 he was awarded the German Federal Cross of Merit (Bundesverdienstkreuz) by the former President of the Federal Republic of Germany, Horst Köhler, for his contributions to the German- American relationship.

Prior to his time at HENSOLDT, a worldleading manufacturer of sensor solutions and other defence and security electronics, Armin Göhring worked as a corporate M&A lawyer at Bird & Bird LLP and Hengeler Mueller in Düsseldorf. Dr Göhring was admitted to the Düsseldorf bar in 2004 and studied law at the universities of Würzburg and Geneva. Dr Göhring underwent his training as a junior associate at a Bavarian Higher Regional Court and at major international law firms in Frankfurt/ Main and Paris. In 2003 he obtained his Doctor of Law degree (University of Würzburg). In 2004, Dr Göhring was awarded a Master of Laws (LLM) by the University of Chicago Law School. In 2015, he was seconded for six months to the legal department of a worldleading aircraft and defence manufacturer in Southern Germany.