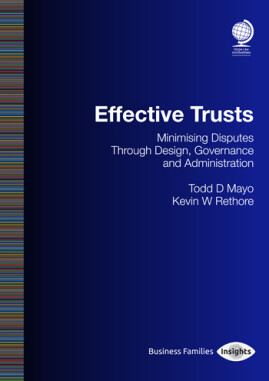 This Special Report examines the causes of trust disputes and explores the steps that settlors, trustees, beneficiaries and others can take during each stage of a trust’s lifecycle – design, execution, administration and termination – to reduce the risk of sparking a dispute.

Trust disputes can be tremendously costly, in terms of legal fees, hiring experts and lost opportunity costs, as well as the costs attendant with the often emotionally charged atmosphere that can pit family members against one another. Despite the high toll, trust litigation continues to increase around the world – both in the number of matters being initiated and the amounts in controversy – as trust instruments become increasingly important vehicles in the management and transfer of wealth of various sizes.

Preventing a fire is substantially less costly than fighting one. Identifying and appreciating the potential causes of trust disputes puts settlors, trust officials and beneficiaries in the best position to prevent a dispute from developing or accelerating.

This Special Report examines the causes of trust disputes and explores the steps that settlors, trustees, beneficiaries and others can take during each stage of a trust’s lifecycle – design, execution, administration and termination – to reduce the risk of sparking a dispute. Supported by real world experience and input from leading international trust practitioners, including estate planners, general counsel and experienced trust litigators, this Special Report delves into key concepts such as:

thoughtful design of a trust’s governance;
incorporating flexibility and adaptability into a trust structure;
the need for constructive communication and engagement between fiduciaries and beneficiaries;
practices and procedures trust officials should consider implementing in trust administration; and
how trustees and beneficiaries can avoid adding fuel to the fire once a dispute arises.
The authors also examine the benefits of involving different perspectives, including those of experienced trust litigators, at various stages of the trust’s lifecycle, and offer practitioner insight into the measures and approaches both fiduciaries and beneficiaries should consider taking when a dispute first presents itself.

Filled with real-world practitioner guidance, perspective and insight on issues of critical importance to fiduciaries, trust officials and beneficiaries alike, this Special Report is essential reading.

Todd D Mayo is an executive director at UBS, where he is a senior wealth strategist in the firm’s Advanced Planning Group. In that role, he works with ultra-high-net-worth families, helping them to design and implement wealth strategies that reflect their goals and values. He helps them create multi-generational structures for managing their wealth, fulfilling their philanthropic visions and optimising tax consequences.
Before joining UBS, Todd was general counsel of Perspecta Trust. He was previously a partner in Cleveland, Waters and Bass and before that served as president of Cambridge Trust Company of New Hampshire. Prior to that he practised trust and tax law. In addition to his role at UBS, Todd is an author. He is the consulting editor of Private Trust Companies: A Handbook for Advisers (Globe Law and Business, 2020) and a contributing author of Advising the Wealthy Client: A Handbook for Working with the Ultra Wealthy (Globe Law and Business, 2020) and Beneficial Ownership Registers: The STEP Handbook for Advisers (Globe Law and Business, 2021). He has also written numerous articles. These include articles on trust governance structures and protecting settlor intent in The International Family Offices Journal. Other articles have appeared in Estate Planning, the STEP Journal, Trusts & Estates and Trusts & Trustees.
When he was a practising lawyer and trust company executive, Todd helped write many of New Hampshire’s laws governing trusts and trust companies. Notably, he was a principal author of the New Hampshire Family Trust Company Act (which governs private trust companies) and the New Hampshire Foundation Act (which was the first act in the United States recognising civil law-style foundations). Todd earned a BA in economics and history from Georgetown University, a JD from the University of California, Hastings College of the Law, and an LLM (taxation) from the University of Florida.

Kevin W Rethore is an experienced trial lawyer representing high-networth individuals and families, leading businesses and fiduciary clients based in the United States, Europe, Asia and the Middle East. After 25 years of practice, including almost two decades with two of the world’s largest multi-national law firms, Kevin became managing partner of Caffrey Hill, PLLC – a boutique law firm that represents an intentionally limited client base in complex litigation. In addition to an active trial practice, Kevin serves certain clients in an outside general counsel role, advising on crisis management and litigation strategy, litigation preparedness and risk mitigation.
Kevin’s career put him in court early, successfully bringing his first case to verdict less than one year into practice. He has since chaired more than 85 trials and arbitrations and argued before state and federal appellate courts across the United States on critical issues, including multiple appeals directed to the scope of personal jurisdiction in an evolving global economic landscape. Amongst other experience, he was a co-author of the Petition for Writ of Certiorari that led to the seminal 2011 US Supreme Court decision, Goodyear Dunlop Tires Operations, SA v Brown.
Immediately prior to joining Caffrey Hill, Kevin was a shareholder at Greenberg Traurig (GT), where he conceptualised, developed and launched the firm’s fiduciary litigation practice group alongside firm leadership. He joined GT in 2018 after more than 15 years with leading global law firm DLA Piper LLP, where he represented clients in highprofile trust litigation, auditors in high-exposure professional liability and fraud litigation, and Fortune 100 companies in catastrophic product liability actions.
Kevin has served as an impanelled arbitrator and third-party neutral mediator on matters including a range of trust disputes. He currently serves as a trust officer on multiple trusts, as well as on corporate and non-profit boards.
Kevin earned a BA in English from Boston College and a JD from the Dickinson School of Law of Penn State University, where he served as an editor of the Dickinson Law Review.