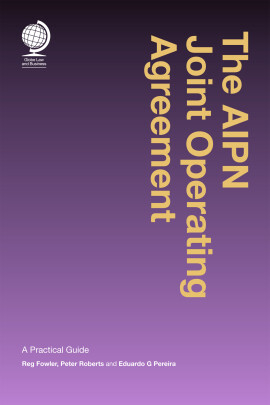 This book offers a pragmatic, detailed clause-by-clause review of the most recent (2012) version of the conventional petroleum AIPN JOA. Each clause is analysed in depth by reference. The book also analyses the major appendices of the AIPN JOA, including the accounting procedure and the lifting procedures.

This book offers a pragmatic, detailed clause-by-clause review of the most recent (2012) version of the conventional petroleum AIPN JOA. Each clause is analysed in depth by reference to: (1) a statement of what the clause says; (2) a summary of the intended meaning of the clause; and (3) observations on how the clause tends to be modified in practice and might be improved. The book also analyses the major appendices of the AIPN JOA, including the accounting procedure and the lifting procedures.

This book is written by experienced practitioners who together have many years of knowledge and understanding in redrafting, negotiating and applying the AIPN JOA. It will be invaluable to legal representatives, financiers, commercial managers, operational personnel and government parties who are dealing with the AIPN JOA, whether for the first time or from a position of relative familiarity.

This detailed commentary will be an essential tool for practitioners and academics working and teaching in the petroleum sector.

Reg Fowler is legal governance counsel in Karachaganak Petroleum Operating BV, in Kazakhstan, on secondment from Shell. He has worked as in-house counsel in Atlantic Richfield, eni and Shell for a total of 22 years, and in every aspect of oil and gas business, including trading and shipping, mergers and acquisitions, production sharing agreements, environmental law and joint ventures. He is particularly familiar with operations in Russia and Central Asia, and speaks Russian. He has published papers on topics such as Arctic exploration and shipping, the effect of state succession on long-term agreements, and the ownership of property by joint ventures.

Peter Roberts is a solicitor with more than 25 years of experience advising on upstream and midstream oil and gas project transactions across the globe, acting for E&P companies and governments. He has authored several leading industry textbooks and numerous other articles and papers and he is a frequent speaker at energy sector conferences. He edits the AIPN Journal of World Energy Law and Business and he is a faculty member of several oil and gas law universities. He is a partner with the firm of Orrick, Herrington, & Sutcliffe LLP, based in London, where he heads up the firm’s oil and gas law practice.

Eduardo G Pereira has been active in the oil and gas industry for over 10 years and is an international expert on joint operating agreements. He has practical oil and gas experience in over 40 jurisdictions covering America, Europe, Africa and Asia. Dr Pereira concluded his doctoral thesis on oil and gas joint ventures at the University of Aberdeen (Scotland). He conducted postdoctoral research at the Oxford Institute for Energy Studies (University of Oxford, UK) and another postdoctoral research at the Scandinavian Institute of Maritime Law (University of Oslo, Norway). He is a professor of natural resources and energy law as a part-time, adjunct and/or visiting scholar in a number of leading academic institutions around the world. He is also a managing editor for the African Journal on Energy, Natural Resources and Environmental Law and an associate editor of OGEL. He is also the author and editor of several leading oil and gas textbooks. Further information about his profile and publications can be found at www.eduardogpereira.com.