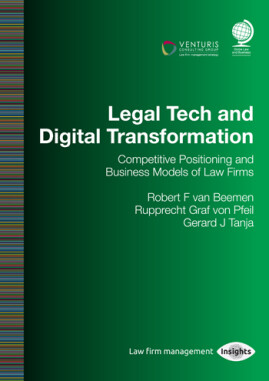 This Report on Legal Tech and Digital Transformation offers a framework on the impact of technology, legal tech and technology-based legal services on the formulation of strategy in law firms; how legal tech affects the competitive positioning and business model of law firms and how national and international law firms implement technology.

This Special Report on Legal Tech and Digital Transformation offers a practical framework on the following topics:

Robert van Beemen is a partner at Venturis Consulting Group in Amsterdam. He holds an LLM in corporate law and is also an alumnus of the Rotterdam School of Management, Erasmus University (Diploma Programme in Business Management & Leadership and the Erasmus Executive Programme in Strategic Management).
He started his career as a corporate and restructuring lawyer with a large Dutch Caribbean law firm in Curacao. In 2009 he became involved in the global Lehman Brothers bankruptcy. He was coresponsible for the winding down of the bankruptcy of Lehman Brothers in Curacao, which included recovering assets and settling creditor claims of over $6 billion.
His main focus within Venturis is advising (upper) mid-market and niche and boutique law firms in the Benelux on strategic challenges such as their market positioning, (international) strategy formulation and market entries.
Mr van Beemen regularly publishes and speaks on the (international) market developments in the legal sector and the impact on the business model of law firms.

Rupprecht Graf von Pfeil is a partner in Venturis Consulting Group and heads the DACH practice. He holds a degree in organisational psychology from the University of Neuchâtel, Switzerland. Since his studies, he has completed various further training courses in group dynamics and systemic consulting.
He has been advising law firms for more than 15 years. His main areas of practice are law firm positioning and strategy, structure and governance, profit distribution systems and the design of change processes. Against this background, he advises law firms on the further development of their business models in order to remain competitive in rapidly and fundamentally changing markets. In 2002, he founded his first consultancy focus on the legal market, which he merged with KermaPartners as head of continental Europe in 2010. In 2018, KermaPartners merged its continental European activities with Venturis Consulting and created Venturis Consulting Group, the leading legal consulting firm in the region and beyond. He regularly publishes articles and chapters in books.

Gerard Tanja is a partner at Venturis Consulting Group in Amsterdam and Milan. He holds an LLM and PhD in law, and has a MBA from the University of California. Before establishing Venturis, he worked at the University of Leyden, was legal adviser to the minister of foreign affairs and was, before moving to Clifford Chance (World Firm Management Committee), general director of the TMC ASSER Institute for International Law and with one of the leading global consulting firms.
At Venturis, Dr Tanja specialises in strategy formulation, merger consulting and market entries. He has been involved in a number of international law firm mergers, has assisted several Anglo-American firms with the establishment of their European offices and has undertaken a series of strategic reviews for leading European law firms. In addition, he has been heavily involved in a number of law firm restructurings and governance initiatives and strategy implementation initiatives throughout Europe.

The authors would like to thank Cristina Montaruli (Milan) and Bruce Chi (London) at Venturis Consulting Group for their research and support in preparing this report.